Chief Rainwater began with the City of North Richland Hills May 12, 1997 as a Firefighter / Paramedic.  In April of 2004, he promoted to Driver /Engineer, and in September of 2006, he was promoted to Captain. During his time in operations, David has served as a Field Training Paramedic, on the Quality Management and Control committee, and in Fire Prevention Education with the Goof Troop clown program. In December of 2013, David promoted to Battalion Chief assigned to the Training Coordinator position until 2015 when he returned to the operations division as a Shift Commander. In March 2017, David returned to administration Assigned as the EMS/Training Coordinator.  In February of 2018, David promoted to the rank of Assistant Chief and serves as the Assistant Chief of Administration.

David holds a Bachelor's Degree in Emergency Management Administration from West Texas A&M University and two Associate Degrees from Tarrant County College. He is currently pursuing a Master of Public Administration from the Bush School of Government at Texas A&M University. He is a Licensed Paramedic and holds the following Texas Commission on Fire Protection certifications:

Chief Rainwater is a graduate of the Texas Fire Chiefs Academy. He is the department’s coordinator and member of the Northeast Fire Department Association Technical Rescue Team. He also serves on Texas Task Force 2, the State’s Urban Search and Rescue team. He received Firefighter of the year in 2000, Paramedic of the year in 2002, and the Medical Director’s award in 2002. 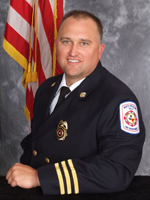