North Richland Hills voters will decide if the city should issue $49,875,000 in bonds for street improvements. Reconstruction of 27 streets is proposed including Glenview, Iron Horse, Bedford-Euless, Chapman, Lariat and others. 35 North Richland Hills Citizens serving on the 2020 Capital Program Advisory Committee recommended the street reconstruction projects. They looked at several factors including existing pavement conditions, traffic volumes, maintenance records, input from citizen surveys and estimated costs. While there are additional streets in need of reconstruction, the committee limited its recommendation to what the city can afford without increasing the property tax rate.

North Richland Hills’ bond proposition for street improvements will appear at the end of the November 3 election ballot, after federal, state and county offices. 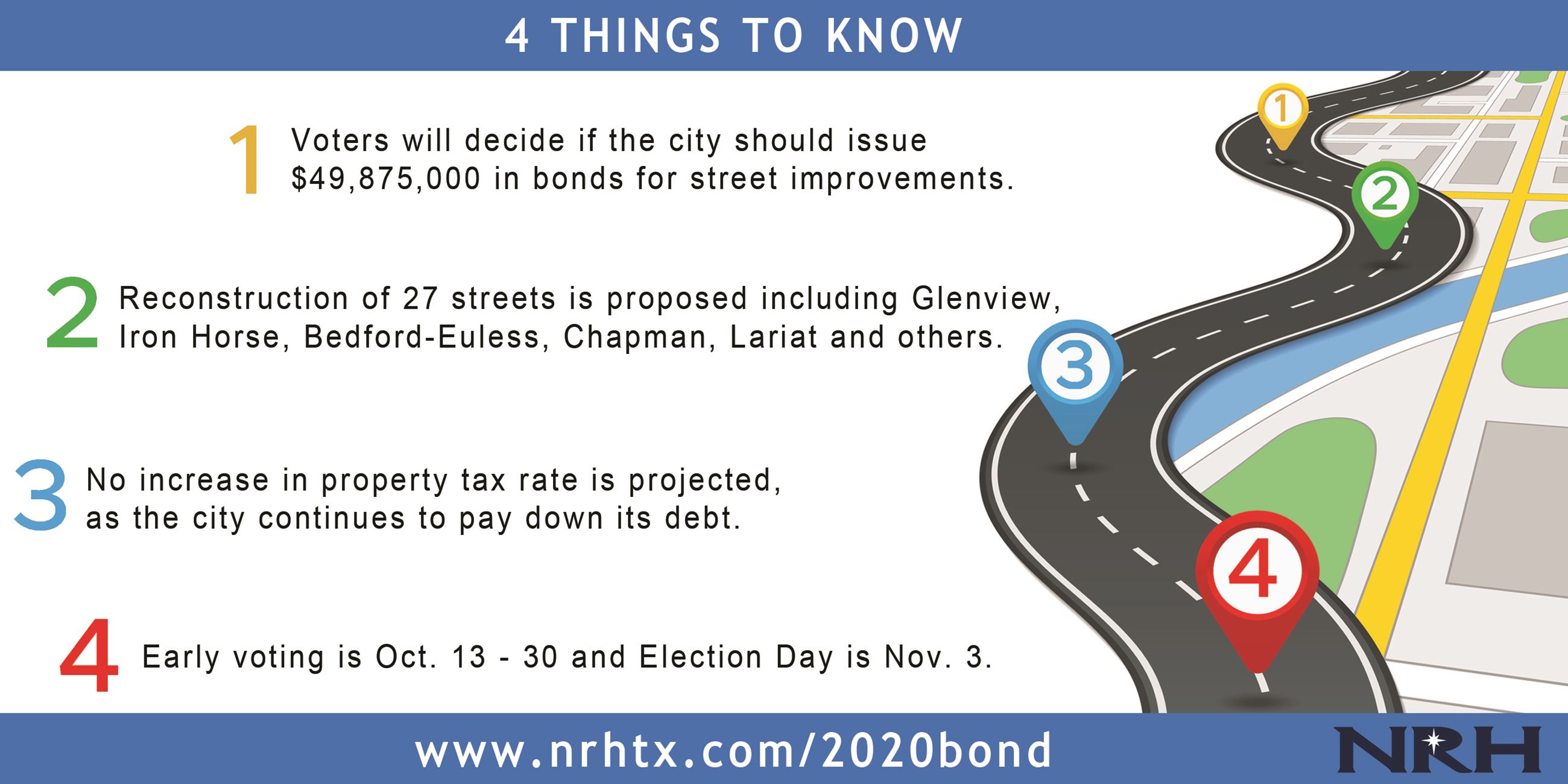 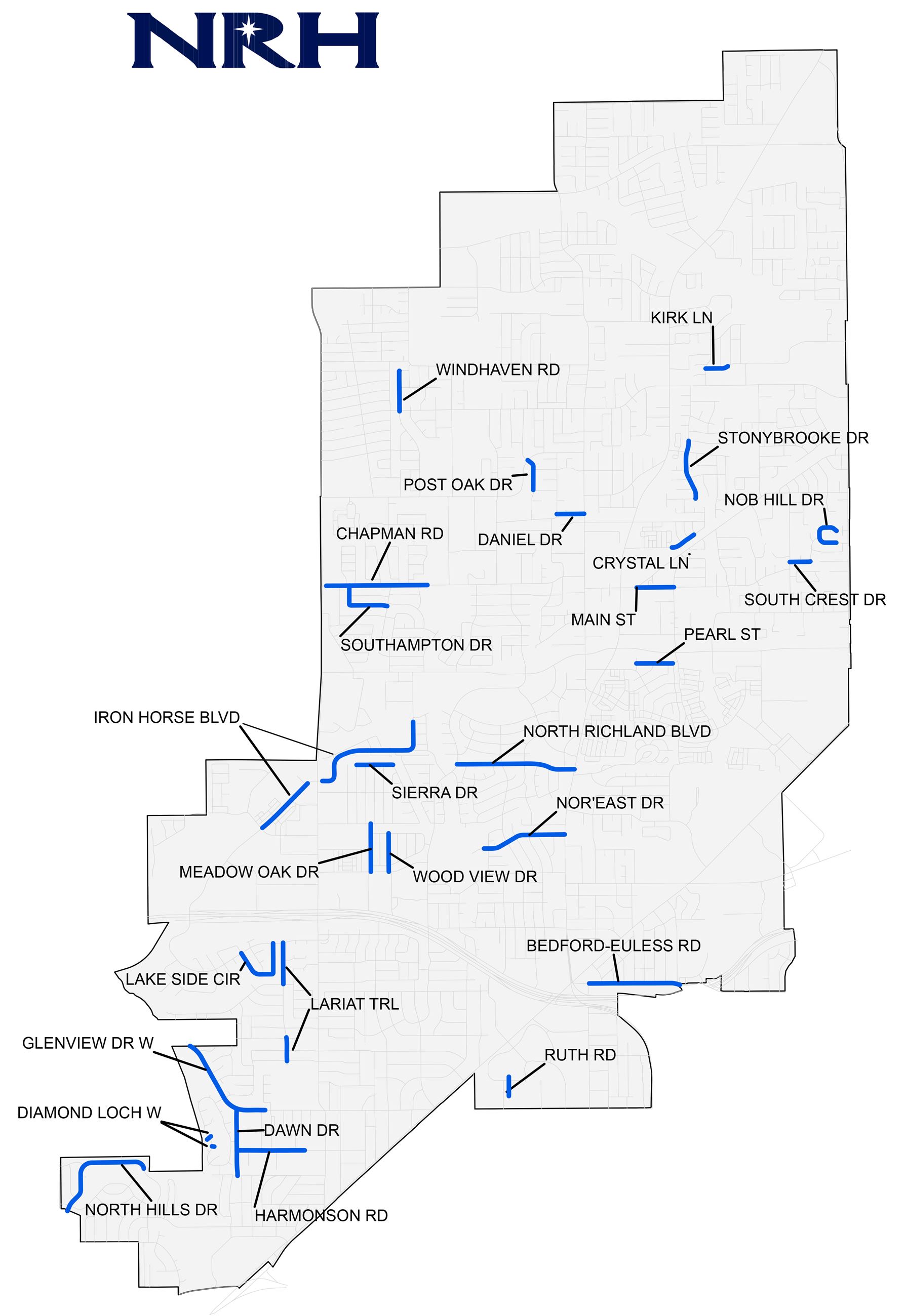 The committee recommended the city hold a $49.875 million bond election to reconstruct 27 North Richland Hills streets including Glenview Drive, Iron Horse Boulevard, Chapman Road, Bedford-Euless Road, Lariat Trail and others. Combined, they total 24.7 lane miles and carry more than 73,000 cars per day. While there are additional streets in need of reconstruction, the committee limited its recommendation to what the city can afford without increasing the property tax rate.

The committee’s recommendation was presented to the City Council on January 27 and the City Council called for a May bond election at its February 10 meeting. Because of the pandemic, in March Gov. Abbott suspended sections of the Election Code to allow May 2020 elections to be moved to November 2020. State law does not provide an option for the city’s election to be postponed beyond November 2020.

It is not uncommon for cities to borrow money to pay for the construction of roads, water lines, sewer lines, city buildings, parks, recreation facilities, and other capital infrastructure. Much like families who borrow money for big ticket items like their home, but not to pay their electric bill, cities limit borrowing to the purchase of assets with a useful life of 20 or more years and never borrow money to pay for day-to-day operations.

Whenever possible, the City of North Richland Hills pays cash for municipal improvements; however, large capital improvements are financed. A general obligation bond is a form of borrowing that provides the city with funds to finance large capital improvements. The bonds are repaid over time with property taxes and therefore require voter approval. The city’s good credit ratings (AA+ from Standards & Poor’s and Aa2 from Moody’s) allow North Richland Hills to pay lower interest rates on bonds.

If the city chose to fund the $49,875,000 in proposed street reconstruction projects with cash, based on current property values we estimate the property tax rate would need to increase approximately 11.6 cents to pay cash for the projects over the next 6 years.

If bonds are used to finance the $49,875,000 in proposed street reconstruction projects, the city projects no increase in the property tax rate to pay for the bonds. As existing debt obligations are retired, the city is able to take on new debt and stay within its budget and current tax rate. Similar to your own budget, when you pay a loan off, the monthly payment can be shifted to another priority.

Issuing bonds allows cities to move forward with capital improvements now, without increasing the property tax rate. It spreads the cost over several years and allows for future taxpayers (who enjoy the benefit of the new roadway or facility) to help pay for the asset. If the city did not finance larger capital projects, the improvements would be deferred for several years until sufficient funding is available to cash fund the projects, during which time costs are likely to go up. 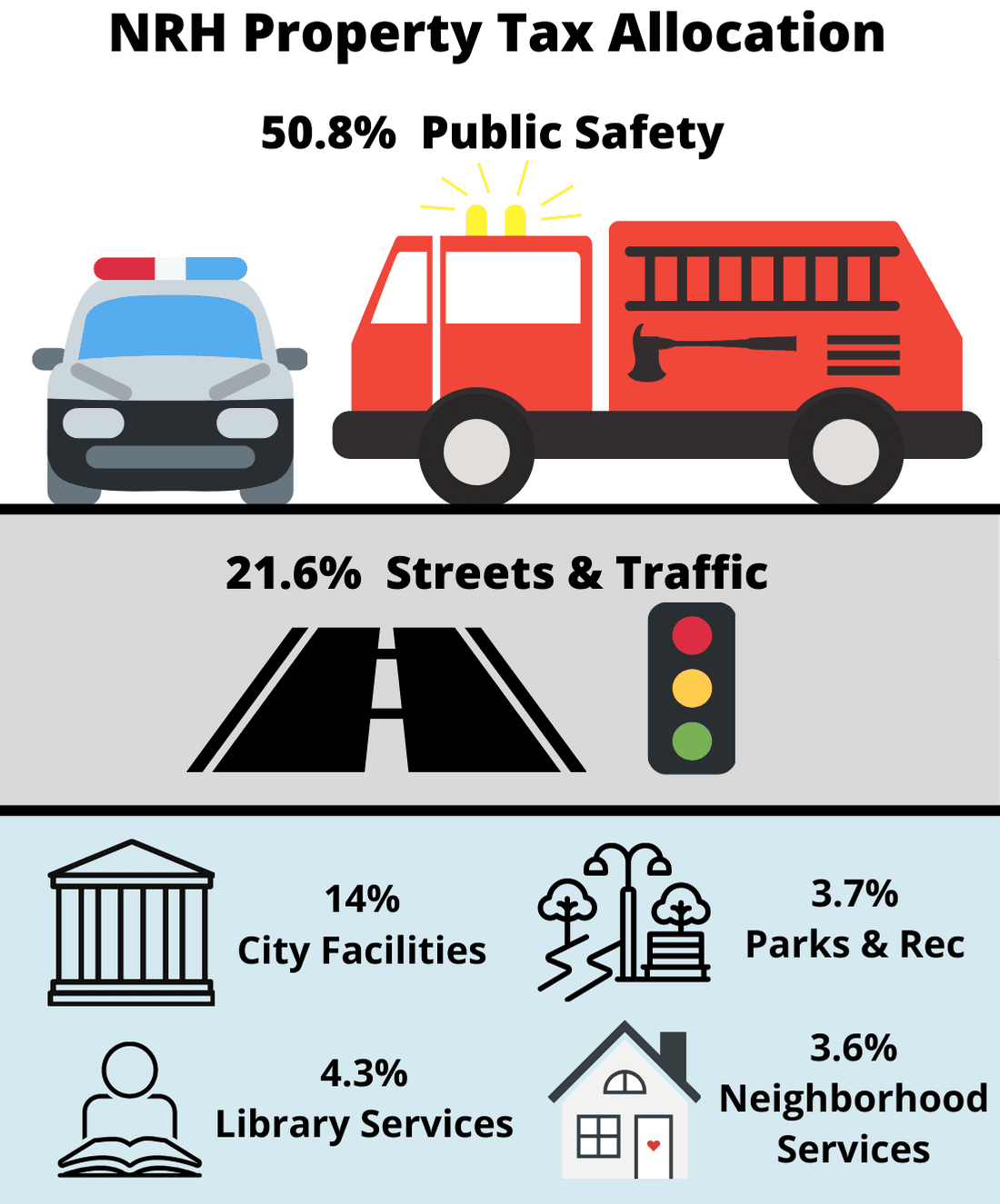 Citizens sometimes ask, “Why doesn’t the city spend less on Iron Horse Golf Course, NRH2O Family Water Park, parks and trails and more on fixing streets?” They are often surprised to learn that property taxes are not used to fund the golf course or water park.

Both the golf course and water park operate like businesses. Each pays for their operational expenses and debt service through the revenue they generate by admissions and the sale of food and merchandise. This year, for the first time in its 25 year history, NRH2O’s season was cut short due to the pandemic and the park received a loan from the city’s reserves to cover some expenses. The water park will repay the loan back to the reserve fund over the next few years.

Since 1992, the development and maintenance of the city’s parks and trail system has been funded primarily through the voter approved ½-cent sales tax for park development and more than $14 million in grants.